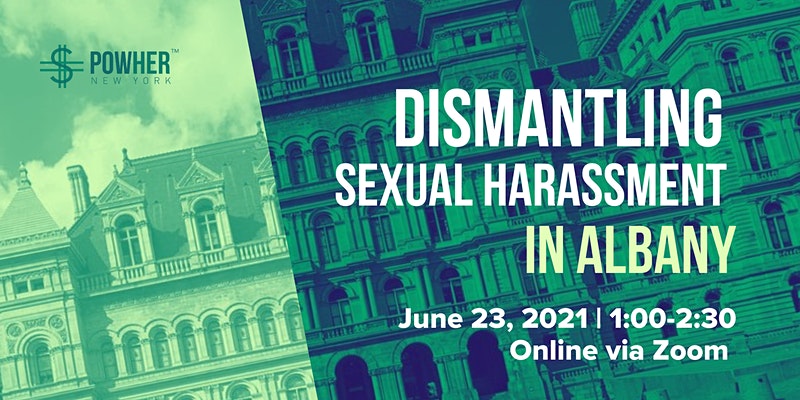 Presented by PowHer™ New York, Time’s Up, and the Sexual Harassment Working Group

PowHer™ New York, in partnership with Time’s Up and the Sexual Harassment Working Group, invites you to join us for a timely and important conversation, Dismantling Sexual Harassment in Albany, online on June 23, 2021 at 1:00PM ET.

Sexual harassment has been endemic to New York State politics for too long. This year brought renewed attention to this issue in Albany and an urgency to ensure that staff, interns and all personnel can work in a safe environment where they are treated respectfully. Sexual harassment and assault commonly go underreported. In fact, sexual assault is the most underreported violent crime in America, with 70% never reported to police. Sexual harassment is an abuse of power created by the unequal power dynamics held primarily by white men over women and BIPOC people in the workplace. Dismantling inappropriate sexual behavior requires both a systemic and individual response to hold men with power accountable and to take responsibility to change abusive behavior.

This panel will identify the legal, policy, cultural, systemic changes needed to change the toxic workplace and address sexual harassment in Albany. As advocates, we need to see real change in this environment so that the many women and others joining the ranks of elected officials, interns and legislative staff do not face the same risks and challenges that generations of women and BIPOC individuals have faced before and have the opportunity to work in a safe and respectful environment.